Fatigue testing is essentially verifying how many cycles a bellows can withstand before failing. The bellows is placed on the “cycle-test machine” and bolted to a hydraulic plunger. Each cycle is counted as the bellows is compressed and returned to neutral. 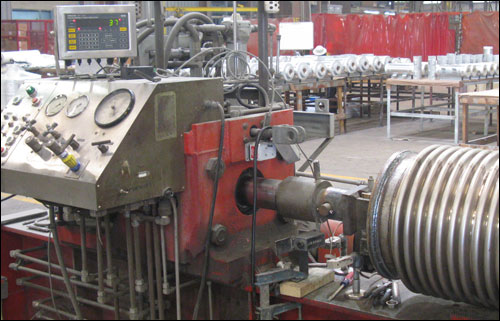 View a Fatigue Test Verifying a Cycle Life of 30,000 (VIDEO)

The objective of the burst test is to determine the ultimate pressure resistance, primarily conducted on bellows. Normally, hydraulic pressure is slowly increased until failure occurs. Pressure balanced pipe expansion joints are designed to maintain a constant volume through the use of a compensating bellows. 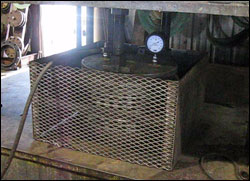 Liquid dye and a white powder observant are used to locate leaks or cracks in the bellows attachment welds. This test is performed for long seam welds before and after forming the bellows. 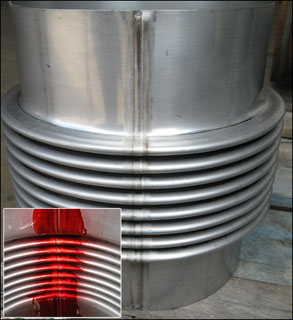 During a hydro-test, the bellows is completely filled with liquid until a desired pressure is reached. The bellows is pressurized for 30 minutes to locate leaks or cracks in the welding.

The bellows is filled with pressurized helium and then “sniffed” to detect leaks indicated by a mass spectrometer. 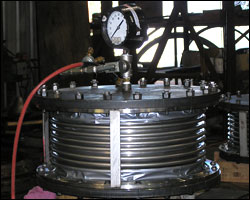 Leak Detection Test – This test is used to detect leaks by sealing expansion joints, pulling a vacuum in the expansion joint, and spraying helium over the surface of all welds. A pump pulls any gas which leaks to the interior of the bellows to a special mass spectrometer designed to detect the helium. If helium is detected, the point of the surface where it was sprayed is marked for repair. When no leaks are found, the flow rate of helium to the mass spectrometer is measured against a standard for the material. A mass spectrometer functions by accelerating a narrow beam of ions of a gas sample through a magnetic field. When they reach the magnetic field, the amount they are deflected depends on their charge-to-mass ratio. Helium molecules are so small, they will penetrate materials at a slow rate when the pressure difference of a full vacuum is applied.