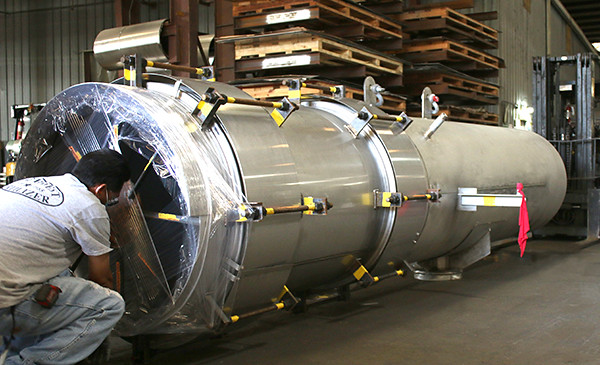 U.S. Bellows designed a universal expansion joint and duct work assembly for a 3rd pass outlet converter to economizer duct work application at a chemical plant in 8 weeks. Expansion joints are used in many economizer ductwork applications near boilers. Plant turnarounds are a vital part of a plant’s maintenance program. They involve a scheduled stoppage of part or all of a plant’s operations. During this time, existing equipment such as expansion joints are removed and replaced with new or upgraded expansion joints. On-time delivery is critical to the plant turnaround schedule in order to limit the amount of time the plant is in shutdown. The total assembly included a universal expansion joint, over 125 feet of custom-built 60” diameter duct work, including elbows, tees, saddles, nozzles, and spring supports. The expansion joints were designed for 0.3 degrees angular movement, 2.875″ lateral, and 3.25″ axial extension. The design conditions were 5 psig at 890 degrees F. The liner, cover, and ducting are fabricated from 304 stainless steel and the bellows are 321 SS. A dye penetrant exam, soap & air test, and spot x-ray on all duct seam welds were performed before shipping. U.S. Bellows has worked extensively on boiler units within the chemical industry and has provided products and designed supports for the unique requirements of economizers including the use of stainless steel and super alloys to support applications such as this involving highly corrosive media.